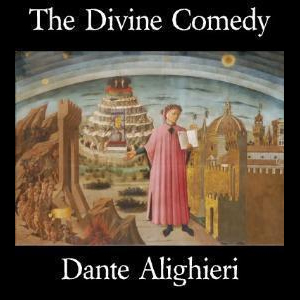 The Divine Comedy (Italian: Commedia, later christened “Divina” by Giovanni Boccaccio), written by Dante Alighieri between 1308 and his death in 1321, is widely considered the central epic poem of Italian literature, the last great work of literature of the Middle Ages and the first great work of the Renaissance. A culmination of the medieval world-view of the afterlife, it establishes the Tuscan dialect in which it is written as the Italian standard, and is seen as one of the greatest works of world literature.

The Divine Comedy is composed of three canticas (or “cantiche”) — Inferno (Hell), Purgatorio (Purgatory), and Paradiso (Paradise) — composed each of 33 cantos (or “canti”). The very first canto serves as an introduction to the poem and is generally not considered to be part of the first cantica, bringing the total number of cantos to 100.
The poet tells in the first person his travel through the three realms of the dead, lasting during the Easter Triduum in the spring of 1300.

Reviewer: Donald R Miller - favoritefavoritefavorite - November 18, 2013
Subject: Truly a Paradiso-to-Inferno Experience
The Purgatorio Version of the Comedy:
Many readers with many levels of heavenish to hellish degrees of quality await you in this community recording. Some of Librivox's best talent are here, along with truly cringe-worthy performances.

If Librivox had only thought to have their better (or in the case of a classic like this, their best) talent read a section each-- one inferno, another purgatorio, and another paradiso.

Uploaded by librivoxbooks on January 20, 2007